Tom has been on staff as a pastor here at Fellowship since May of 2012.  He became our full time pastor at the beginning of 2016. Born in 1977 and graduating from Vienna High School in 1996, he worked in other vocations for 20 years before his time here.  He has been preaching the Gospel for 15 years and has preached in many churches in our small community. God blessed Tom throughout his life with many wonderful men of God as pastors and mentors, and has given him the burden to see God’s Name exalted in God’s people. His prayer is that God would make Fellowship a holy joyful people and then make them a fruitful joyful people, so that the Name of Jesus would be exalted through a holy joy in Vienna and around the world. Tom hopes that God would use him to preach Christ from the scriptures to equip His church in answer to that prayer.

Tom has been married to his wife Assiah (Sullivan) since November 1996. They have six children, four boys and two girls. He lives in Simpson in the house that he was raised in; the same house that his great-grandfather raised his family in. He enjoys spending time with his wife and children and also attempts to enjoy running.

David is a charter member of Fellowship Baptist Church. In the midst of rebellion throughout his early adulthood, the people of Fellowship have always remained faithful to him! The people of Fellowship are family to him!  God broke through David’s rebellion when he was 29 years old, and by grace, and grace alone, caused him to repent and believe in Christ! God’s grace that saved him is the exact same grace that is now causing David to continue to trust Christ as He makes a new creation of Him. As God begin His work on his heart, David began to understand that God was calling him into ministry. Little did he know at the time, his church Family at Fellowship Baptist would be the tool that God used to confirm His plan to call David to be one of the Pastors of the very people that had been so faithful to him all these years!  David is very humbled and thankful to God that He has given him a heart to love and serve those that have loved and served him so well these many years!

David feels blessed to have been married to his wife Sandra since 1991.  They have had many joys in life together, but none more than the pleasure of being the parents of Jacob and Joshua! David sees God’s gift of marriage and parenthood as the primary means that He has used to shape his life.

The deacons, in keeping with the practice of the New Testament churches, function as servants of the Church.  They work with the pastors as spiritual leaders in caring for church members and others in the community, engage in witness and education, and work to maintain the fellowship of the church.  The deacons currently minister to the church body through the Family Ministry Program.

The staff at Fellowship Baptist Church represents a wide variety of God’s people.  All from different backgrounds with varied experiences, they come together to achieve one goal…serving God through serving the families of Fellowship.

Joanne has been the Office Manager at Fellowship since March of 2004 and brings with her over 20 years of administrative experience.  Her love of God coupled with her computer and people skills has allowed her to see her position grow into more of a ministry than a job.  Able to do most things asked of her, she is always ready to help when called upon, but always keeps in mind Colossians 3:23, “Whatever you do, do it enthusiastically, as something done for the Lord and not for men.”

After living in several places from coast to coast and beyond, Joanne was very happy to finally settle down in Vienna in the fall of 2002, prior to her husband’s retirement from the United States Marine Corps.  Joanne has been married to Wendell Cantrell since 1987 and has three children:  Dell, Wesley and Katelynne.  In 2013, she earned her bachelor’s degree in Elementary Education/Special Education from Southern Illinois University in Carbondale. She enjoys camping, crafting, volunteering, and spending time with her family.

Joshua Stafford serves as the youth leader among various other roles within the church and community. Being a native of Johnson County and actively involved at Fellowship since childhood he has a love for the Lord and often speaks to the authenticity, infallibility, and inerrancy of scripture. When asked what Wednesday Night Youth is all about at Fellowship Joshua says simply, “We teach the Bible.”  He is consistent in making every attempt to bring the church, community, and all people back to God’s Word.  He shared with the church at a missions night, “We must keep our eyes on Jesus Christ because when we are focused on Him we don’t notice the storm and waves around us, it is only when, like Peter, that we take our eyes off of Jesus that we fall into disbelief.”  Joshua believes that if we can help each other by always pointing back to God and His Word that we will better equipped as servants in the Kingdom.  He also explained that frequently youth ministries seem to become a parachurch ministry when in reality no matter the age of people they are all called to be actively involved in the life of the local church collectively.

Professionally Joshua serves as a school superintendent in Vienna.  He has been involved with public education for over a decade and believes all work should be treated as Colossians 3:23-24 describes. “If we ‘work heartily, as for the Lord and not for men’ we are not only being obedient to God’s Word, but also serving our community and pointing others to Jesus Christ.” He goes on to explain, “there seems to be an exodus from the public square by Christians, when in reality we should be the vary people running into the public square, running into the burning building if you will, and proclaiming Biblical truth so that people might be rescued and so that Jesus would be made known and glorified.” 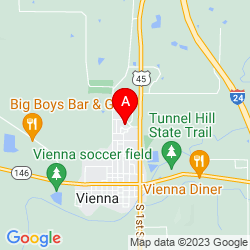